“The Future is Coming” is free!


I am a big supporter of science.  Science is the foundation of our society and it will allow our species to go beyond anything we can imagine.  So I was happy when I heard about the March for Science which will take place this Saturday.  The marches in DC and in cities around the world are to put a spotlight on the importance of science in our lives.

While I’m not going to any march (I’m not fond of crowds) I did want to do something.  So from now through Sunday my Kindle ebook “The Future is Coming” will be free to download.  “The Future is Coming” contains ten essays dealing with issues that are science fiction, but will quickly become just … science.  No matter how some try to ignore it, the future is coming and we need to start thinking about it. 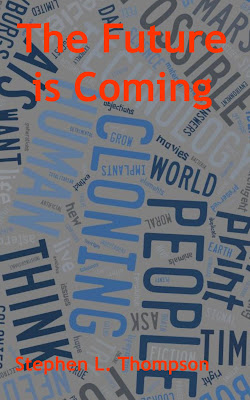 Here’s an excerpt from the essay “Cloning Humans.”

Someday – almost certainly sooner than anyone suspects – a human will be cloned. There will be protests, boycotts, marches, condemnations, congressional hearings, etc., all for this one minor event. I say minor event, and here is why.

The biggest problem human clones will face comes from people watching too many bad science fiction movies. In those movies, 99.9% of what they show of cloning is utter crap. In reality, clones will not be mindless automatons who will blindly follow the orders of some megalomaniac out for galactic domination. Nor will you run the risk of walking into an alley where someone will jump you, and ten minutes later a clone will walk out of the alley to steal your identity. And clones will not “remember” the lives of their donors and do … whatever. A clone will just be another human. That’s it. If they can escape the mental scaring caused by “parents” or guardians bent on making them into exact duplicates of the people who donated some DNA, they will be no more screwed up than the rest of us.

Cloning will – especially at first – be extremely expensive. That combined with the fact that we already have over seven billion humans made the old fashion way begs the question, what need is there to create clones? Seriously, what will be the point? Yes, grieving families will want to replace loved ones, and companies will take their money to give them a clone who will have the same DNA as the person they lost. But the clone – because they will have lived a different life – will not be the same person. And yes, some historical figures will be cloned as well as the best and brightest of various fields, but when the Einstein clone takes up poetry instead of physics, what will be the point of continuing?

There will be clones, but they will make up a miniscule fraction of the population. But a ton of legal and ethical questions will surround them. Will the donor of the DNA have all the rights and responsibilities of a parent? What recompense will people have if they are cloned against their wishes? Will the donor be able to abort the clone, and if so, how far into the cloning process will they be able to do that? If the donor is Canadian but the cloning is done in the United States, will the clone be Canadian, American, or have dual citizenship? Will a clone be able to become President? It’s probably a safe bet that few – if any – of these questions will be answered by the time human clones walk among us.
Posted by Stephen L. Thompson at 1:00 PM